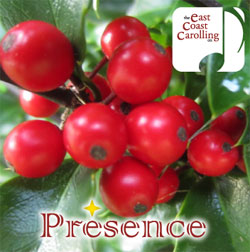 Well, our compilation CD doesn’t have the licenses for all songs to be sold via iTunes, CDBaby, ReverbNation, etc., so you’ll have to do this the old-fashioned way… and what a nice time to think less about instant gratification, and enjoy writing your cheque and popping it into the mailbox, with the anticipation of a new CD coming to you – or your friends and family – in the mail.

And soon our Presence will be festively yours!

Just look at all the songs you’ll get to hear…